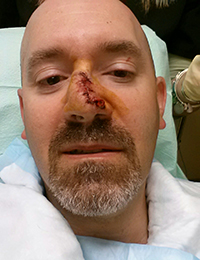 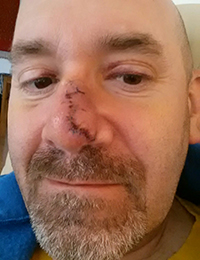 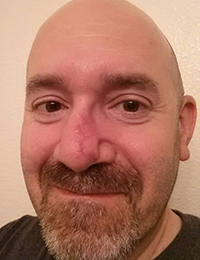 In April of 2014, I had a large basal cell carcinoma removed from the left side of my nose.

This surgery unexpectedly lasted almost four hours as the deeper they went the more cancer they found. At the end of the procedure, the doctor realized that plastic surgery was required to reform my nose.

As you can see from the photos, the surgery was quite disfiguring and left a very prominent scar from the bridge of my nose and curved around the tip.

I work in financial services and need to look professional when I interact with my clients. Therefore, I was very concerned that I would not look presentable for business purposes and might even put off new clients as a result of my disfigured appearance.

When I discussed my concerns with Yoshie, she suggested that I use Clayton Shagal collagen and elastin gel.

So, I purchased the products that she recommended and started using them immediately after the stitches were removed and the scar had stabilized.

Within a few weeks there was noticeable improvement and after three months people stopped asking about the scars.

Today, it is completely healed with minimal scarring.

The doctors were amazed at the incredibly fast progress that I made in the healing process and the plastic surgeon himself commented that he had never seen such a fast recovery and was astounded by the results.

Thank you Yoshie and Clayton Shagal. I now run my business with confidence without worry regarding my facial scars.